Bonjah kick off a national Australian tour tonight with their latest ‘Evolution’.

This first single off Bonjah’s much anticipated 3rd album due out later in 2013 is filled with the funky little hooks, driving drums and smoky vocal melodies that we’ve come to expect from the Kiwi lads who made Melbourne their home with a one-way ticket back in 2006.

The national tour kicks off tonight at The Corner Hotel in Melbourne and here’s a little taste of what you can expect! 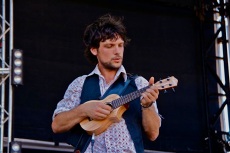